The work is inspired by the zoetrope, an optical toy invented in the 19th century. Loop is a cross between a music box, a zoetrope and a railway handcar. The retro-futuristic machine, more than two metres in diameter, creates animated fairy-tale loops. Through the combined efforts of members of the public working the hand lever, the image cylinder lights up and creates the illusion of motion in the drawings.

The black and white images, tinted through a strobe effect, recall the earliest movies and are visible inside the cylinder as well as outside it, so that they can be watched from close up or far away. The speed at which the images fly by, the frequency at which the light flickers and the rhythm of the audio composition are all directly related to the pace set by the participants, who can be of any age.

Loop has been brought to the streets of Ottawa by Artengine, the ByWard Market BIA, and Nuit Blanche Ottawa-Gatineau. 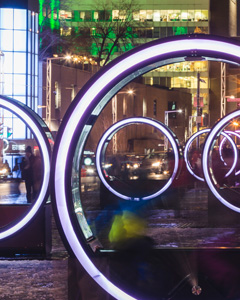 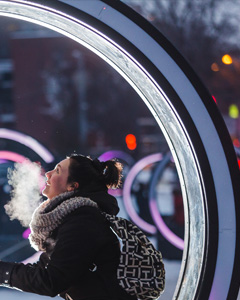 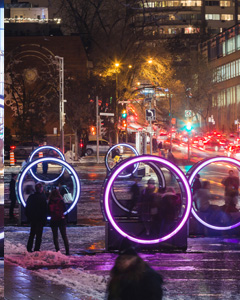